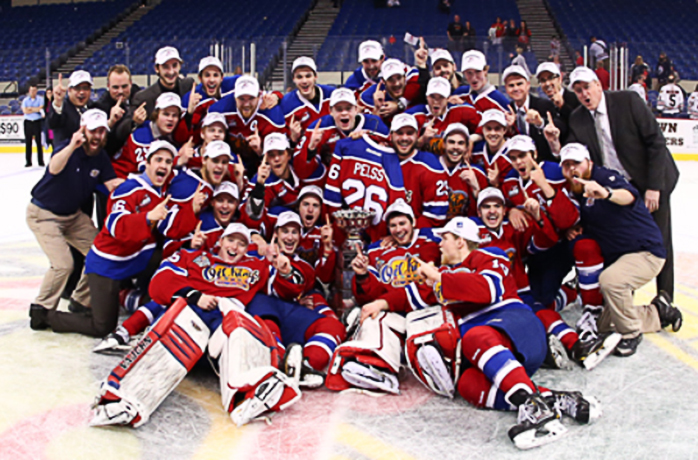 Congratulations to the Edmonton Oil Kings on another WHL Championship!

The Edmonton Oil Kings won their 2nd WHL league title in 3 years by defeating their perennial opponents, the Portland Winterhawks, in game 7 on the road. The win made the Oil Kings the 1st team in WHL history to win game 7 in the championship series on the road.

After a heartbreaking game 6 loss at home where the Oil Kings were up by 3 goals on 2 separate occasions and lost in OT, the team showed tremendous character and rallied to defeat the powerhouse Winterhawks in their own barn by a score of 4-2.

As has been the case since the modern inception of the Oil Kings, Donnan and Vimy Hockey were well represented on the ice and behind the bench.

On the blue line, Donnan/Vimy Hockey was represented by Aaron Irving who was recently ranked in the top 100 of the NHL Central Scouting draft list for this year’s NHL Entry Draft.

Vimy Hockey High School Instructor Steve Hamilton is the team’s Associate Coach for the fourth season, having already won a WHL Championship with the club in 2011-2012.

Providing up to the minute video updates for the coaches and players was former Donnan/Vimy Hockey staffer Jory Stuparyk, the team’s Video Coach.

And the Oil Kings can thank Donnan/Vimy Hockey Skating Instructor from Quantum Speed Vanessa Hettinger for their fast legs as she was the team’s Skating Coach.

With the Oil Kings win, Donnan/Vimy Staff, student-athletes and alums captured the AJHL, CIS and WHL championships this season.