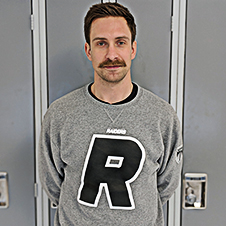 Travis is back at Vimy Ridge Academy five years after completing his practicum here. He spent 4 years teaching in St. Paul, Alberta while coaching the St. Paul Jr. B Canadiens Hockey Club in addition to the St. Paul Lions Football Team.

Travis has worked with the OR Sports platform since his days playing in the AJHL where he spent 4 years. He was fortunate to work with many current and former AAD staff members along the way. In his last two years with the Spruce Grove Saints, Travis set two AJHL records for lowest GAA and highest SV%, was selected to the All-Star Team, won the Top Goaltender Award, and won a League Championship.

Travis then pursued his BEd degree after getting a hockey scholarship to attend York University. He also played for MacEwan University and was named an ACAC Second-Team All-Star. Travis finished his education attending and playing for the University of Alberta Golden Bears where he was part of a team that won a National Championship in 2014.

Travis is very excited to join the exceptional team at Vimy Ridge Academy and looks forward to working with and developing goaltenders and helping them reach their goals.