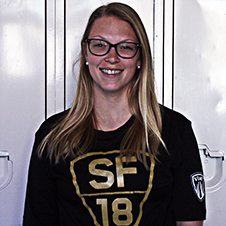 Sarah grew up watching her Dad play lacrosse for the Edmonton Outlaws and fell in love with the game. She began playing minor lacrosse for the St. Albert Rams when she was 10 years old. In 2007 her family moved to Ontario where she played box lacrosse for the Whitby Warriors and field lacrosse for the Oshawa Lady Blue Knights. With these 2 clubs, Sarah won three provincial championships. She was also a member of the first girls U19 Edge team.

In 2010 Sarah began her freshman year at Limestone College in Gaffney, South Carolina. During her 4 seasons at Limestone she was a four-time All-Conference player, Conference MVP, Conference Tournament MVP, three-time All-American, and captained the team her senior year. She still ranks sixth all time in D2 NCAA assists and 13th in points. Limestone won four Conference Championships and played in the National Tournament all four years, playing in two National Championship title games.

In 2011 Sarah captained the U19 Canadian National team that captured the Bronze medal in Hannover, Germany.

In 2013 Sarah completed her strength and conditioning internship at Elite Training Systems in Whitby, ON.

After graduating from Limestone College in 2014 with a major in Strength and Conditioning, Sarah moved to Salisbury, England where she coached lacrosse at the Godolphin School. During her year in England she also coached the U15 Wilts and Dorset County team, and the Senior South West Regional Team. In the spring of 2015 Sarah coached the Wales U19 “B” Team at the Home Internationals Tournament hosted in Edinburgh, Scotland. In the summer of 2015 Sarah was the assistant coach of the U19 Wales National Team that competed in the World Championships held in Edinburgh, Scotland. In the fall of 2015, Sarah began coaching at Vimy Ridge Academy.

Sarah has coached at the provincial level, winning Bronze (2017) and Silver (2018) with Team Alberta at nationals. She was coaching Team Alberta once again in 2020, until the shutdown forced the cancellation of the tournament. In the summer of 2022, Sarah coached Team Alberta to a silver medal at the U19 Women’s Field Lacrosse Nationals.