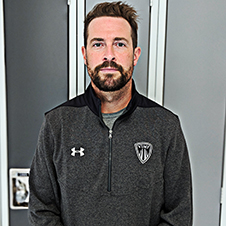 Ryan grew up in Lloydminster, the middle son of three boys. Plenty of time was spent at the hockey rinks as Ryan and his brothers played the majority of their minor hockey careers in Lloyd.

He went on to play for the hometown Blazers of the AJHL and then spent one season with the Concordia Thunder of the ACAC before moving on to the University of Alberta to complete his Physical Education degree.

Mr. R Faulkner is not to be confused with his brother, Mr. B Faulkner at Vimy. Ryan has come full circle as he completed a full time U of A practicum here then ventured off to pursue a career in the Wake Boarding industry.

Years later, he is back at Vimy and excited to be involved with the hockey community on a daily basis once again.

Ryan and his wife Michelle enjoy as much time outside as they can with their young daughter Paige and son Rhett.