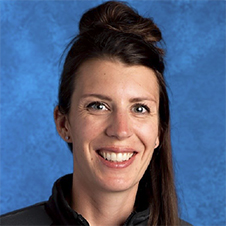 Mrs. Noble was born and raised in northern British Columbia. She played varsity basketball with the Grande Prairie Regional College Wolves from 1999-2001, received ACAC Academic -Athletic Awards both years, and transferred to the University of Calgary to play basketball with the Dinos. She obtained an academic scholarship to attend U of C and earned her first degree in Kinesiology in 2003. Travelling overseas to study in Perth, Western Australia was an incredible experience and Mrs. Noble received a Graduate Diploma of Education from Edith Cowan University with a major in Physical Education and minor in Biology in 2005. She completed her after-degree in Education from the University of Alberta in 2007 and was presented with the Edwin Parr Teacher Award for exemplary first year teaching performance with EPSB in 2008.

Mrs. Noble has coached various volleyball, basketball, slo-pitch, soccer and track & field teams and continues to compete in indoor and beach volleyball, triathlons, and ultimate frisbee. She has a passion for traveling (40 countries and counting!) and for being active outdoors, particularly in the mountains or at the lake, with her husband, Evan, and their three young kids: Hannah, Ryan and Bennett. Mrs. Noble is very proud and excited to be joining the talented team of staff and students at Vimy and to be part of the Sport Fit and CTF Programs!