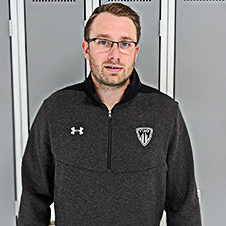 Kurtis is in his fourth year as the Director of Goalie Development at the Vimy Ridge Academy and will be leading all the junior and high school goalie sessions.

Kurtis has been working with the OR Sports platform for the past 5+ years under founders Lyle Mast and Dustin Schwartz. The OR Sports platform of Head Trajectory and tracking will continue to be the main priority of goalie training at Vimy Ridge as well as the Donnan hockey programs.

Kurtis grew up in the Sherwood Park Kings Club Association before being drafted into the WHL and moving onto a 5 year career there. Splitting time between the Portland Winterhawks and the Kamloops Blazers Kurtis enjoyed a successful junior career. During his time in the WHL he was able to attend 2 NHL camps, the Phoenix Coyotes in 2008 and the Edmonton Oilers in 2009. Kurtis got into a few minor pro games and backed up for the Edmonton Oilers in an emergency situation before choosing to attend the University of Alberta and earn his degree. During his time at the U of A, Kurtis played for the Golden Bears Hockey team, a perennial championship contender. His years with the Golden Bears saw a lot of personal success and more importantly team success. Kurtis was named the CIS Goaltender of The Year for the best goalie in Canada’s university hockey in 2012-13. During his tutelage with the Bears, they managed to win the Canada West league 4 out of 5 seasons and win the national championship his last 2 season. Kurtis enjoyed his time at the U of A and attributes a lot of who he his today from his time spent at university.

Currently, Kurtis is coaching in the WHL as the Goalie Development Coach for the Edmonton Oil Kings. Kurtis is also coaching with the Sherwood Park Crusaders, OHA Edmonton and other AAA teams around Edmonton.

When Kurtis is not at the rink you will find him fishing on various lakes in Alberta, golfing in the summer, and running year round!