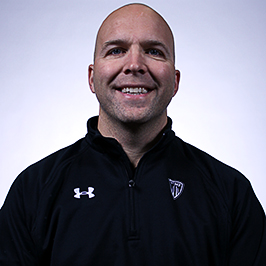 I was born in Edmonton but attended many schools growing up in northern Alberta, where I eventually made my way to Simon Fraser University on a football scholarship and transferred to the U of A to finish off my football career and obtain a Bachelor of Education degree in 1999.

I immediately started teaching in EPSB and after 3 years I took off to teach in Frankfurt, Germany for 2 years of work and travel. Upon my return, I taught for another 4 years when I then became an Athletic Director and filled that role for 4 more years. I then became an assistant principal for one year and returned back to teaching at Vimy the year after.

The past 3 years at Vimy I was the DH of PE and the school’s Athletic Director while this year I chose to take a little off my plate and return to the role of “just” teaching.

Personal accomplishments have been playing Golden Bears Football (1994- 1999), being certified as Canadian Athletic Administrator, climbing Kilimanjaro, being a 5 time Ironman finisher and 6 time half Ironman finisher, along with fulfilling my passion for travel to all of Western Europe and parts of Eastern Europe, as well as Africa and most of North America.

None of this would be possible without the love and support of my two little girls (Nina and Leona) and my wife, Karen.