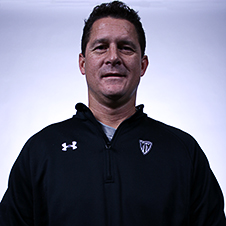 Kent has been with Vimy Hockey for 5 years. He currently teaches Junior High Science 7 and 8.

Kent grew up playing hockey in St. Albert. He started his first year in the WHL for the Seattle Thunderbirds as a 16 year old and played for 3 seasons before playing for the Medicine Hat Tigers. Kent also attended the Hartford Whalers training camp.

Kent then was fortunate enough to play for the University of Alberta Golden Bears under the guidance of Coach Bill Moores for three years and one year under Coach Rob Daum. In the 4 years Kent was with the Bears, they won 3 Canada West Titles and 1 National Championship. Kent also was the Assistant Coach with Howie Draper for the University of Alberta Panda’s Hockey team who captured the 2002 CIS National Championship title.

Kent’s coaching philosophy has been built upon strong University of Alberta Golden Bear principles. Hard work, enthusiasm and having the players develop to their full potential – not only their hockey skills but their character development. This will be reached by working on specific skill sets, developing the team aspect and knowledge and understanding of the game.

Kent is married (Lori) and has a fun and busy hockey season ahead as he has 3 boys (Brady, Connor and Logan) all in hockey. As well, Mr. Dochuk is a Alberta Scout for the Seattle Thunderbirds.