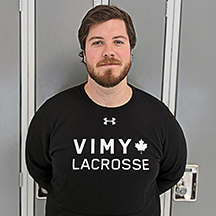 Mr. Wheaton is a Teacher and Instructor for the Vimy Lacrosse Program.

Jordan has been at Vimy for several years. He was born in Surrey, British Columbia, and moved to Sherwood Park in 1999. He received his Bachelor of Commerce degree in 2012. He worked as a retail manager for one year before pursuing his passion of education. He completed his Bachelor of Education degree in 2015 at The King’s University.

Mr. Wheaton grew up playing lacrosse for the Sherwood Park Titans, including their tier 1 team, the St. Albert Junior Miners, and is currently a member of the Edmonton Senior B Warriors lacrosse team. Mr. Wheaton also grew up playing hockey in Sherwood Park, where he played for the Midget AAA Kings. He is also in his sixth year coaching hockey. He spent four years with the Sherwood Park Kings Athletic Club, where he served as a Head and Assistant Coach, and is currently in his second year as an Assistant Coach with the Fort Saskatchewan Major Midget AAA Rangers.

When not at school or the rink, Mr. Wheaton loves spending time with his beautiful wife and family, which usually involves being at the rink or recreation facility.