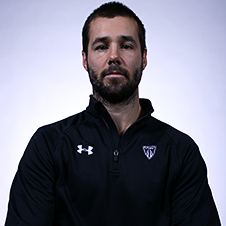 Mr. Quinlan began playing lacrosse at the age of seven for the Sherwood Park Titans because his older brother had taken up the sport. Bringing a wealth of knowledge and experience to Vimy Lacrosse, Mr. Quinlan aspires to teach young players how to think about and understand the game. He played all his minor lacrosse in and around the Edmonton area, having played for the Sherwood Park Titans, Millwoods Warriors, and Edmonton Miners at different points while growing up. Mr. Quinlan has won three national championships while playing lacrosse in Edmonton. The first championship was the First Nations Trophy (Under 19 Field Lacrosse) in 1998, followed by a Founder’s Cup (Junior B) in 1999, and a President’s Cup (Senior B) in 2007. Mr. Quinlan had a busy junior career playing for three different teams in three different provinces. Two years were spent with the Edmonton Miners (Jr. B), after which Mr. Quinlan moved to B.C. to play two years for the New Westminster Salmonbellies (Jr. A), and finally landing in Ontario to join the Orangeville Northmen (Jr. A) for one year. Upon graduating from junior, Mr. Quinlan joined the Coquitlam Adanacs of the Western Lacrosse Association, playing for four seasons before returning home to play the two seasons with the Sherwood Park Outlaws and one season with the Spruce Grove Slash.

Following his 9-year playing career, Mr. Quinlan moved behind the bench and became the Rush’s defensive coach. In his 5 years assistant coaching the Rush, he won three championships and lost in another final. Mr. Quinlan is very proud of the fact that he was able to be a part of the 2015 Championship season in his hometown of Edmonton, before moving with the Rush to Saskatchewan.

Mr. Quinlan stepped down from coaching the Rush following the 2018 championship season to spend more time with his young growing family (Gracie, Sadie, and Annie) and beautiful wife, Shelby.

Mr. Quinlan was set to return to the Rush this season, this time as offensive coach but will have to wait to make his return due to the Coronavirus.

Mr. Quinlan comes to Vimy Ridge Academy having completed his Bachelor of Education at the University of Alberta. He graduated with a major in Mathematics and a minor in Physical Education. As well as teaching those students enrolled in Vimy Lacrosse, he will be teaching junior high mathematics and high school mathematics. Even though his greatest thrill in life is playing each and every sport he can, he chose a major in Mathematics because he just loves numbers. Mr. Quinlan truly believes he can make math applicable to anything at any time. When not in the classroom, you can find Mr. Quinlan working out in the fitness center, riding his bike or talking someone’s ear off.