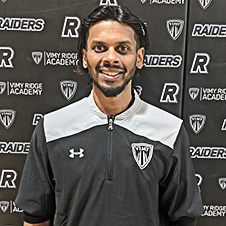 Coach CJ is thrilled and honoured to take over as the new Director of Baseball at Vimy Ridge Academy School. He is a highly experienced and energetic coach – being his 19th year serving budding baseball student-athletes and their families.

It all began for him when he attended the University of Auckland studying Psychology and Education. Whilst coaching and building grassroots programs at various club teams as well as spearheading several National program teams, he developed a curiosity to further understand movement, biomechanics, nutrition, and optimal athlete performance.

CJ’s love for the game extends him spending time coaching coaches as a NCCP Learning Facilitator, and as a Level 3 Baseball Canada umpire official.

Some fun facts about CJ: born in Ceylon. Grew-up in New Zealand. Resides in Edmonton. Baseball appeared in his veins at 19. Loves flora & fauna. Is a Jungle Tiger most of the day! Loves to move, read, listen/play music – and travel. Plans to climb Mt Everest & explore space one day.

CJ is extremely excited about the opportunity to build the baseball program with his colleagues & staff at Vimy from the ground level and has very high expectations for his student-athletes both in the classroom, on the field and in life. Now, combines his thirst to learn and become better, his compassionate yet holistic-coaching style, guiding and empowering our next generation to attain their own goals and dreams.