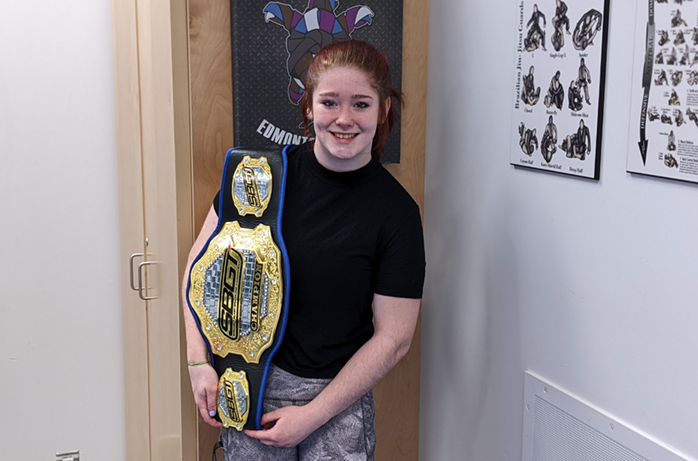 Victoria Fortin is in her third year with the BJJ Program and currently in grade 11 at Vimy Ridge.  Victoria has been winning gold medals in tournaments since she began jiu-jitsu, winning at each of the youth belts before receiving her blue belt a few months after turning 16.

On September 24th, 2022, Victoria competed in her first tournament at blue belt in a submission-only super fight against a competitor that has been tearing up the blue belt division in Alberta throughout the tournament season.

Victoria dominated the match from start to finish and won the SBG Drayton Valley Tournament Women’s Blue Belt superfight title with a Kimura!

The Kimura is an armlock where the implementer isolates the opponent’s arm and torques the shoulder in order to cause pain or injury resulting in a tap out submission.  Victoria attempted three armbar submissions and realized her opponent had very flexible elbows and wasn’t going to tap to that submission, so she switched to the Kimura which attacks the shoulder.  In most cases people have tighter shoulders resulting in a more reliable submission against flexible opponents.

See the video below for Victoria’s victory moment!

Victoria’s teammates and coaches in the BJJ Program are extremely proud of her victory and are looking forward to seeing what’s next for her!