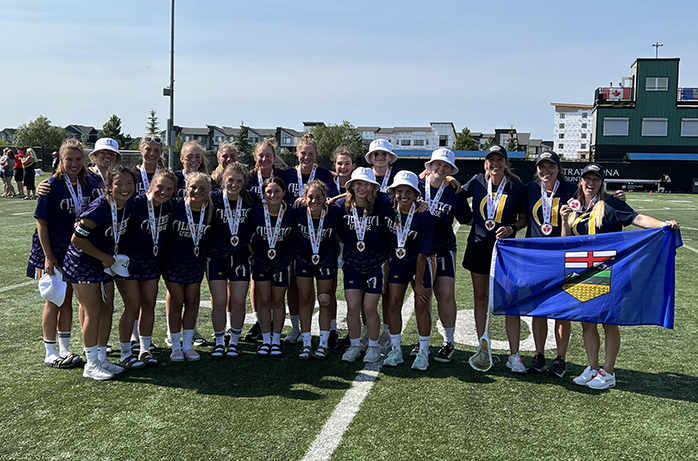 Hosted in Strathcona County, the U19 Women’s Field Lacrosse Nationals brought together the top talent from all across Canada to compete for the title of best of the best. The tournament was named the Jenny Kyle Cup, in honour of Jenny Kyle, who according to Lacrosse Canada “worked tirelessly across her life to support the development of women’s field lacrosse in Canada.”

Team Alberta was bolstered with talent from Vimy lacrosse, both on the field and on the sidelines. The team was led on the field by Vimy Lacrosse’s Ella Royer, who was named team captain. The roster also featured student-athletes Hope Dunkley, Ethne Bilawhuck and alums Liz Pym and Kells Usher.

After a 2-2 round robin, Alberta faced a tough test in BC if they wanted to reach the gold medal game. At one point in the game, Alberta was down 6 goals. The team showed resiliency, coming back from the deficit and taking the game 12-11.

In the final, Alberta faced powerhouse Ontario. They kept the game close through the first half, but Ontario pulled away in the 2nd half to earn the gold.

Congratulations to Team Alberta and special shout-out to the Vimy Lacrosse student-athletes, alums and instructors who did our province proud!