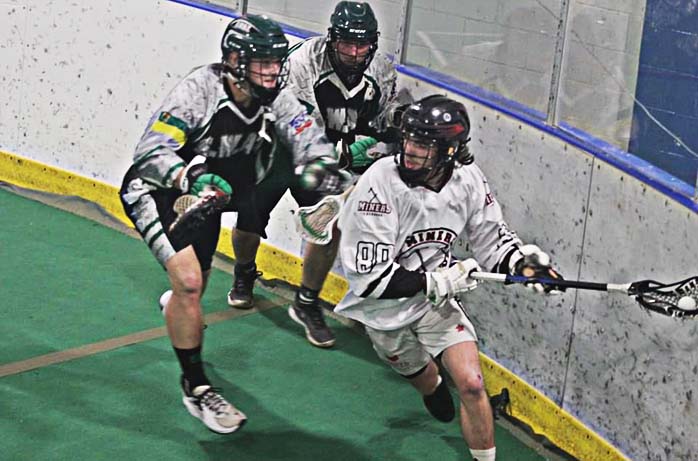 During the 2021 National Lacrosse League entry draft, two Vimy Lacrosse alumni heard their names called. The draft, held virtually this year due to the lingering effects of the pandemic, is always deep with lacrosse talent from around the world. Ethan Forgrave (18’) and Hunter Aggus (18’) found themselves drafted 43rd and 86th overall respectively. They join fellow alumni Kevin Pym (drafted by Buffalo in 2013), Nik Farrus (drafted by Georgia in 2017) as well as alum and current Vimy staff Tristan Rai (drafted by New England in 2019) who have been selected to the National Lacrosse League.

After capping off a Junior A career with an Alberta championship and an undefeated 14-0 record, Forgrave was picked up in the 3rd round of the National Lacrosse League entry draft. The crafty, lefty forward was beneficial to the St. Albert Miners championship run, playing alongside Vimy alums Marcus Needham, Dallyn Rai, Jayden Green as well as two recent Vimy lacrosse graduates Alex Lemieux and Josh Dewart. Ethan is also an exceptional student, currently enrolled at McGill University. He is also a member of the McGill Lacrosse team, which competes in the CUFLA against the best Canadian Universities. Ethan, when asked about the feeling of being drafted to the Rush, said “It was an amazing feeling and felt like the culmination and vindication of countless hours of work, by me but primarily by those around me who have helped me tremendously through my career.”

As someone who spent his entire junior and senior high school years at Vimy, Ethan knows a thing or two about what it means to put on the Vimy logo every day. “The Vimy lacrosse program is one of the primary reasons I have made it to where I am today, the opportunity that the program grants you is one that is sparsely offered elsewhere. Box lacrosse is not focused on anywhere else in Alberta like it is there, and because of the sheer amount of lacrosse you get to play, you get to improve greatly. Furthermore, the mentorship I had under Paul Rai and Jimmy Quinlan changed the way I conducted myself as a person, and prioritized my values”

Lastly, when asked about what advice he had to give the current generation of lacrosse players at Vimy who may aspire to play at the highest level one day, Ethan had this to say. “Decide whether you want it or not. If you want it, the tools are in front of you to get it, you just have to use them. Listen to the coaches. Put in the work.” The work doesn’t end after draft night as Ethan knows too well. Preparations for the NLL season are already on the horizon. The season is slated to begin on December 3rd, 2021.

Finishing his career in the Ontario Junior A Lacrosse League with the Six Nations Arrows, Hunter adds a physical defensive presence to the back end of the Buffalo Bandits. Hunter chose to pursue box lacrosse outside of Alberta following his minor career. The decision to travel to Ontario proved fruitful for Aggus, allowing him to play in some of the best junior leagues in the country against top talent.

Aggus was also a member of Team Canada during the World Junior Lacrosse Championship in 2018. Culminating in a gold member against the Iroquois National team. This tournament typically features many future NLL draft picks and players, with Aggus being no exception. Hunter has played out of the defensive gate for his junior career, being a physical defender and a transition threat. Another spot on Hunter’s lacrosse journey landed him on the Paris RiverWolves of the Arena Lacrosse League. He was a key component of that team and was even named as a 2020 All-Star. Hunter joins a talented Buffalo Bandits team that competes for a championship every year.

The staff at Vimy wishes Ethan and Hunter all the best moving forward in their lacrosse careers.