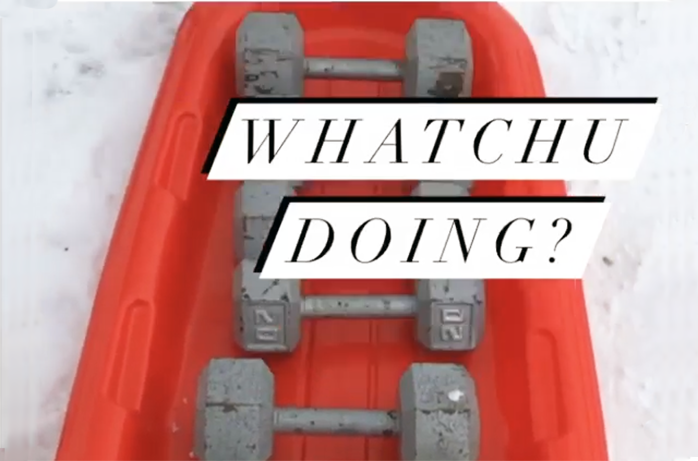 During the month of February, Vimy Fitness Director Heather Osgood created a social media campaign to engage and empower current and former student-athletes that she has trained. Though she works with athletes of all genders and skill levels, her #WhatchuDoing series of Instagram posts connected the young women that she trains currently with positive female role models who have gone on to find success in many areas of their lives.

As today is International Women’s Day, we thought it would be a great time to feature one of our longest-tenured staff members in Ms. Osgood and the great work she does for our student-athletes both inside and out of the Vimy Fitness Centre.

Using her personal business account, the campaign worked to foster connections between athletes and build community. Below, Ms. Osgood explains the campaign and it’s intentions:

“The original intent behind this initiative was to create a community where women support one another. I wanted to create a platform that would motivate, encourage, and inspire people to afford themselves some grace during these difficult times. Each day in February, I would use instagram stories to post a video or picture of myself being active. I would then tag a past or present athlete of mine asking them “Whatchu doing?” I chose to participate in a variety of activities in order to highlight that being active doesn’t always have to mean crushing a workout in a fitness centre. My experience with athletes during Covid reflects that many of them are feeling pressure to meet the same training outcomes/demands that they are normally accustomed to in a “regular” season. The reality is that for many that may not be feasible given government restrictions put in place. I felt like seeing others being active in creative ways would help develop a community of support knowing that we’re all in this together.

It’s important to note that NONE of these athletes knew they were going to be tagged in a post! I had the pleasure of working with some of these athletes from the age of 13 years old all through their college/university careers. Some of the athletes featured are now almost 30 years old and still keep in touch with me. There was a diverse group of young women featured – Bantam, Midget,  NCAA, USPORT … basically players who have played all across North America.

As the campaign grew, it became clear that more of an impact was being made. My younger followers gained access to outstanding role models that have accomplished many things they aspire to attain in their own personal journeys. I even had athletes message me about posts saying how much they looked up to and respected another athlete featured. As the month went on, it was inspiring to see how much the campaign was resonating with everyone. Several post-secondary coaches reached out to me saying how important they thought this campaign was and that they were following it intently. I was blown away by how far this initiative transcended across the coaching/training community.

I pride myself on creating a training environment that empowers young women to have a voice in this world and to not be afraid to use it. Training environments are a catalyst for developing so many important life skills that translate into being a confident woman. Positive self-image, confidence, communication and leadership skills are built through the training process. I work with a very impressionable age range and that is not lost on me. It’s a magical transformation when an athlete finds their own sense of power and purpose.

The campaign far exceeded my original expectations and it was so fun to see it take on a life of its own. I started to see a pattern of engagement that reflected excitement and curiosity – kind of like  “Who is up next?” idea. I am beyond grateful to everyone who took the time to reply. Every single person tagged made an effort to respond which absolutely pulled on the heart strings. I am so proud of all these amazing young women and truly value the connections I have built with all of the athletes I have been fortunate enough to train along the way.  The hard part was only having 28 days to tag people! Thanks to everyone who participated: whether you contributed a post, a comment or followed along with the journey.“

With thousands of views and a great amount of positive energy created, it’s safe to say that the #WhatchuDoing campaign was a huge success. At this time, Ms. Osgood is not saying that this may be an annual series…

…but she’s not NOT saying it.