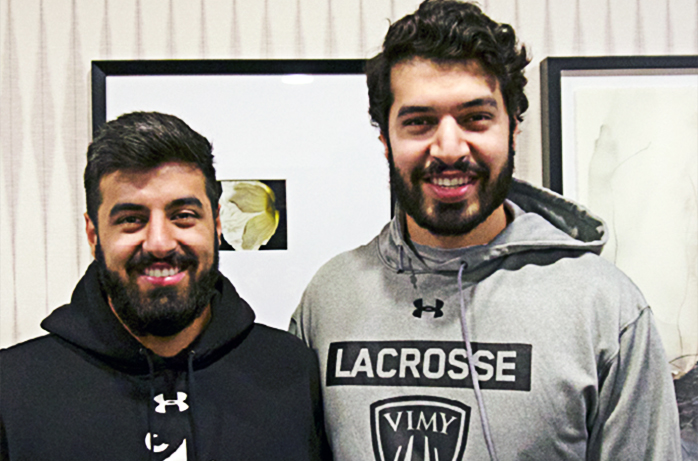 At first glance, one would never guess that these two brothers are actually fraternal twins. They have different interests, aspirations and mannerisms. Arguments have been a staple of their relationship over the years, as many siblings can attest. However, one thing that has remained consistent between them has been their love for the game of lacrosse. The Hazrah twins arrived at Vimy Ridge Academy in 2008, entering the lacrosse program in grade 8. By their own admission, lacrosse was challenging for them. “We only played lacrosse for about a year or two before we came to Vimy. The year before I only just learned how to cradle. We also knew nothing about field lacrosse” Kaveer says with a laugh. Arsh also remembers his early experiences at the school. “When I got there, I realized how little I actually knew about the game. At first, it’s a little intimidating watching the higher skilled players, but once we got past the learning curve we were so happy we made the switch to Vimy”

While early struggles in lacrosse were common throughout their first year, the classroom was always a place where the Hazrah’s went above and beyond. They attribute their academic success to the combination of classes and athletics at Vimy. “My father was concerned at first that being in a sports program would hurt our education, but it really was the exact
opposite” Arsh continues on to say, “I felt that we actually excelled when we switched to Vimy because we had to manage our time better or else we would miss out on the lacrosse portion of the day” Both of the Hazrah brothers found tremendous academic success, consistently at the top of all of their classes.

As first-generation Indo-Canadians, the Hazrah’s understand the realities of race relations in sports. In a predominantly Caucasian sport, the twins sometimes felt isolated compared to their peers. “There aren’t a lot of Indians in mainstream sports in general, so when you step into a niche sport like lacrosse you sometimes get singled out compared to your teammates.” Arsh says. In the game of lacrosse, there are very few Indo-Canadians to look up to. Ranjit and Nirmal Dillon were inducted into the Canadian lacrosse hall of fame after having decorated careers for the Victoria Shamrocks in the 1960s and 1970s. Unfortunately, very few people actually know about the existence of their outstanding careers. When the Hazrah brothers arrived at Vimy, the two felt at home from the moment they stepped on campus. “When we came to Vimy and joined the lacrosse program we instantly felt at home. “It’s such a benefit to the kids that AAD
has diversity in their staff. It helped us so much because we didn’t feel alone or isolated” Kaveer says. Arsh also reminisces about the friendships
he made at Vimy. “I can’t imagine having this close of a friend group, even to this day, without being in the lacrosse program.” Kaveer also adds,
“Almost 8 years later and all of us are still in touch and hanging out with each other. That’s one of the best things about Vimy and the lacrosse
program is you make such great friendships and connections.”

Arsh and Kaveer began to see improvement in their skills and eventually began playing at the highest levels in the sport. They played Junior A box lacrosse and competed in tournaments across the United States, becoming key contributors on Vimy Lacrosse trips. Arsh was selected 1 st overall in the RMLL Senior draft in 2016. “I never thought I would be this involved in lacrosse. For people like Kaveer and I, who really didn’t have much lacrosse knowledge at the beginning, its crazy to see how far we’ve come.” Arsh says, thinking about his growth as a player. Kaveer on the other hand, chose to pursue his education at Carleton University in Ottawa and played on the varsity lacrosse team, competing in the CUFLA for four years against high level Canadian talent. The two have found continued success in academics as well. Arsh is in the process of completing his PhD in environmental chemistry at the University of Alberta, where he was also the president of the University’s club lacrosse team. Arsh is also a teaching assistant in the chemistry department. He hopes to work in the environmental industry in the future. Kaveer is currently completing a Master’s degree in geology from the University of Calgary. Just like his brother, Kaveer is also a teaching assistant in the geology department.

These different life routes encapsulate the relationship that these siblings have, each with their own identities and goals, while at the same time, both excelling in their chosen fields. The two hope that younger generations at Vimy can find success in lacrosse and academics like they did. Kaveer reflects on his own time at Vimy, “Arsh and I were not experienced at all when we first started, but we worked hard and good things happened because we just enjoyed the game and never took a day off. You never know where the game is going to take you.” Arsh adds to his brother’s thoughts, “The things you learn at Vimy don’t just translate to lacrosse or academics, it really translates to life in general. The skills and discipline you learn through Vimy helped us so much to grow and I’m so glad we made the decision to go here.”