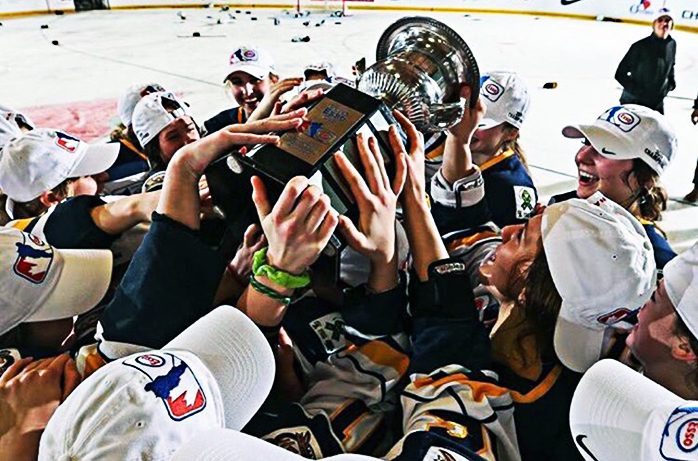 The St. Albert Slash completed one of the most difficult tasks in Canadian Minor Hockey by coming out on top of the over 100 Midget AAA Hockey teams across this country and capturing the Esso Cup in 2017.

Making it to the tournament for the 3rd year in a row would have been a feat by itself, and Head Coach Dan Auchenberg painted his team as the underdog during media interviews coming into the 2019 tournament.

Throughout the tournament, the Slash faced adversity like they hadn’t faced all year. After winning their opener, game two was an overtime loss to host team and early odds-on favourites to win the tournament, the Sudbury Lady Wolves. Game 3 for the Slash was another setback to rival Saskatoon Stars, featuring a non-call on the late game-winning goal that amplified the sting of the loss.

The Slash regained some confidence with a convincing 4-0 win over the Atlantic representative Halifax Fire.

The last game before the semi-finals was a crucial one for both teams on the ice, with positioning for the semis not set for either the Stoney Creek Sabres or the Slash. But it was not to be the Slash’s night, losing the game 4-0 with an overall effort that left questions to be answered post-game.

The coaches and players held an emotional closed-door meeting after the game where the players honed their focus and pledged to get back to their style of selfless hockey.

The Slash took these lessons into the medal rounds, avenging their round-robin losses to the Stars and the Lady Wolves to cement their 3rd championship in a row.

This is the trademark of the coaching style of Coach Auchenberg. After decades of coaching hockey at the highest levels, his tactical and skills-coaching abilities are unimpeachable.  But, the reason that Dan’s teams are successful are that the athlete’s on-ice performance is not the only metric to gauge their contribution to the team. Coach Auchenberg imparts the lesson to each player that character and selflessness is as important of an ingredient to the success of the team as any on-ice ability.