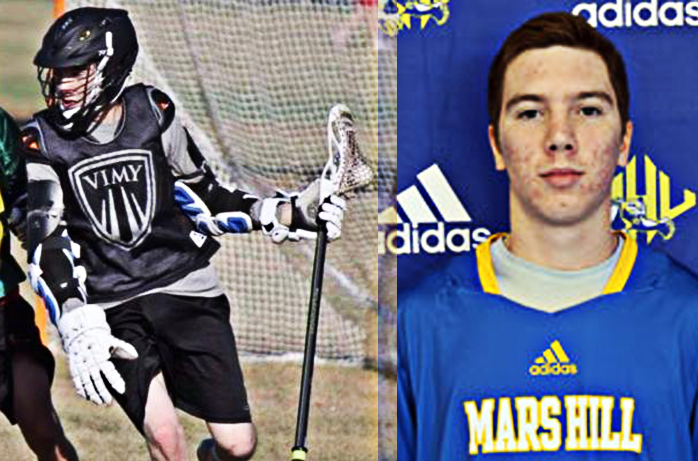 Parker is sophomore at Mars Hill University, graduating from Vimy in 2017. Parker plays attack and has had a successful debut thus far. Vimy connected with Parker over the winter break to discuss his successful freshman year, as well as the trials as tribulations of going to school in another country.

You’re in your sophomore year at Mars Hill University, looking back at your freshman year how do you think the jump from high school to university was, all in all? Is there something you wish you would have known before you left Canada?

The jump from high school to University is a big one. School is much more difficult, you have to be self-driven work in order to be successful. Having motivation is a key skill in developing an academic work ethic. In regards to lacrosse, again it is a large jump. Everyone you play against is a good lacrosse player-they are bigger, faster and stronger than almost anyone you play against in high school.  If there was one thing that I wished I knew, it was just going to class. I slacked too much in that regard and it hurt my overall success as a student.

You performed well your freshman year, what do you think contributed to this success?

I think a big contributor to my success was my work ethic. Coaches at the college level value work ethic higher than most other things. That led me to get playing time, and then to get a starting position on my team.

There’s a couple other Canadians on your team, was having them there helpful for your adjustment moving from Edmonton, Alberta to North Carolina?

Having Canadians on my team was additionally a huge help in my adjustment to the university environment. It gives you people that you can instantly relate with and understand you on a level that other people can’t. My roommate was from Halifax, and that helped both of us immensely to settle in and become comfortable.

What are you looking forward to the most in the upcoming season?

The thing I’m looking forward to this upcoming season is playing competitive lacrosse again. The fall season is a grind, and you see all the fruits of your labor when you finally play in the spring.  Also at Mars Hill, we have one main rival: Tusculum College. We have a long history with Tusculum, and they aren’t too far from us, so I’m excited to come out on top of that rivalry.

What’s your best lacrosse memory since you’ve been at school?

I think my best story since I’ve been at school is probably when I scored my first college goal in my first college game. We hadn’t scored yet and we were about to go into the second half and I took a pretty long shot and scored the first goal of my career and my teams season on an all-American goaltender.

Thank you, Parker, for sharing your story! The Vimy lacrosse family wishes you the best of luck in your upcoming 2019 season, and we hope to see you beat your rival, Tusculum!