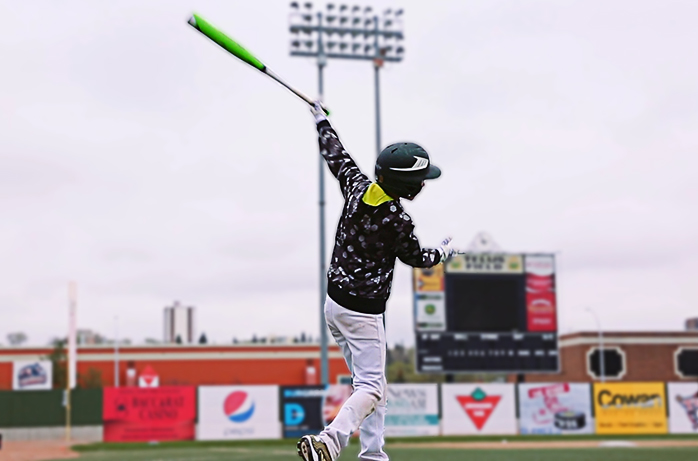 Vimy Baseball has officially had a great start to the Programming. All baseball programming has utilized Telus Field and all of the professional amenities that have been available to the likes of Johan Santana, Jason Giambi and Justin Morneau. The batting cages are winterized for year round usage, the weight room has been updated for baseball specific training and the strength and conditioning areas have been a huge part of the off -season programming. Along with the outstanding coaching staff the Vimy Baseball students have also been mentored by the New University of Alberta Baseball Club and their students/athletes. This is a complimentary part of the program that really helps the younger athletes and raise their level of baseball specific performance. The academy has also partnered with the Big League Experience and offered spring training opportunities in Las Vegas, Nevada and Phoenix, Arizona in February and March of 2017. Both locations in addition to a staff member from Vimy Ridge will have former National Team coach Marty Lehn, Former Big League All – Star Shea Hillenbrand and Former World Series Champions Albie Lopez in Attendance as instructors. All staff members are looking forward to the new year and with the school finishing the construction we look forward to an outstanding 2017.

Drew Boyer – He joins the baseball academy from Leduc after serving as Technical Director for Leduc Baseball Association. During the 2015 season, Boyer was at the helm of the Fort McMurray Oil Giants Midget AAA program. There he restarted a baseball program that had been dormant for several years, guiding the Oil Giants to their best season ever while recording the most wins in a season in team history. Prior to his tenure in Fort McMurray, he served for one season as pitching/third-base coach for the Red Deer Braves in 2014, leading them to a Midget AAA Tier II provincial gold medal. From 2008 – 2013, Boyer served as an assistant coach with the Edmonton Cardinals Midget AAA program for six seasons. While with the Cardinals, he helped lead them to back-to-back Midget AAA provincial gold medals along with national championship births in 2009 and 2010. Boyer also served as pitching coach for Team Alberta U16 at the annual Prospects Series in 2013 and 2014. During his own playing career, Boyer pitched collegiately at North Iowa Area Community College (NJCAA) before transferring to Wingate University (NCAA). While at Wingate, he was part of a Bulldogs’ squad that won back-to-back South Atlantic Conference championships in 2010 and 2011. As a senior, he immerged as Wingate’s top reliever posting a 2.29 ERA in 23 appearances out of the Bulldogs’ bullpen. Since 2006, Boyer has represented Alberta (as either coach or player) at seven national championships.

Andrew Russell – Born and raised in Edmonton, Andrew spent the majority of his amateur baseball career with the Spruce Grove White Sox program, as a catcher and an infielder. During his tenure with the White Sox, Andrew would represent Spruce Grove and Alberta in two Western Canadian Championships, once in Bantam and once in Midget. It was during this same time that he was involved with the Rustler’s Baseball Academy and the Prospect’s Academy, both out of St. Albert. Collegiately, Andrew would spend a year with the Vancouver Island Baseball Institute (VIBI) Mariners and would be part of a team that would go on to win a National Championship in 2010. Since 2013 Andrew has been a major contributor to the Confederation Park organization. He serves as a Fall Ball Head Coach, a Lead Instructor for youth camps year-round, and as a coach for their 16U Babe Ruth / Little League team. Off the field, Andrew is a part of their board of directors, in-charge of fields and maintenance. During this time, Russell has also been a contributor to a number of Baseball Alberta Camps as a hitting and catching instructor. Prior to the Cubs, Russell has served as an assistant coach at the Bantam AAA level for both the Spruce Grove White Sox and the Edmonton Cardinals. In 2014, Andrew would help guide the Edmonton Cardinals to a Bantam AAA Tier II provincial gold medal. Andrew has also served as an assistant coach for the Zone 6 team in the Alberta Summer Games in 2014. Andrew is a certified coach in both baseball and softball.

Jason Lee – Born in South Korea, Jason participated and was on the winning team at the Little League World Series in 1985. Jason also has loads of experience in baseball as he is now considered a Canadian Citizen. He has played, coach or scouted for the following organizations: New York Yankees, Cleveland Indians, Atlanta Braves, LG Twins, Team Canada and Sherwood Park Athletics. Jason will act as a Part – Time Instructor for the first full year of the program.

Heather Osgood – Strength and Conditioning Coordinator
Heather graduated in 1999 from The University of Alberta with a Bachelor of Kinesiology. She has worked and presented professionally as a personal and team trainer for 17 years and is currently in her thirteenth year acting as the Fitness Director for Vimy Hockey and Vimy Lacrosse. Heather has designed and implemented training programs for countless hockey players from various leagues, including, but not limited to: The NHL, AHL, WHL and AJHL. She has also worked extensively with female hockey players encompassing leagues such as NCAA, CIS and ACAC. Over the past 7 years, Heather has been the Strength and Conditioning Coach for the Women’s U-18 Team that represents Alberta at the U18 National Championships. Many players from these teams have gone on to represent Team Canada in various tournaments around the world. In addition to training hockey players, Heather has worked with many lacrosse athletes. She has provided strength and conditioning programs for The Sherwood Park Outlaws (senior men’s lacrosse team), U-19 Razorbacks and the Junior B Titans.