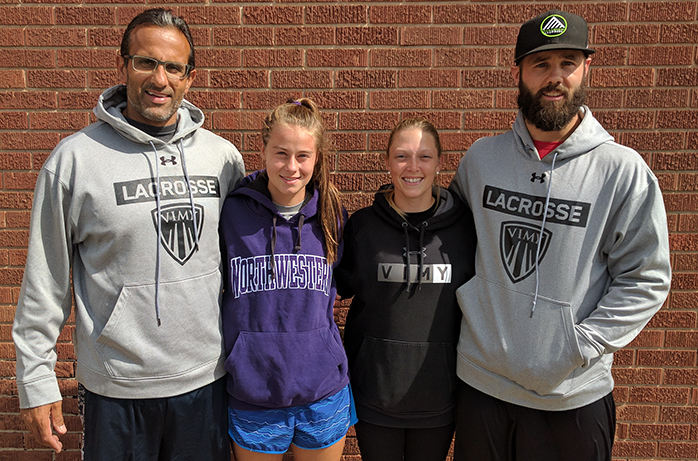 Vimy Lacrosse is proud to announce that Eve Hritzuk has verbally committed to the admissions process at Northwestern University. Eve is currently in the class of 2019 at Vimy Ridge and will enter Northwestern University in the Fall of 2019. Eve has been a student-athlete at Vimy Ridge Academy since Grade 7. She has been an integral part of Vimy Lacrosse for three years and one of the stalwarts of the growing female field lacrosse program. Eve honed her lacrosse abilities through her hard work in box lacrosse before crossing over to the women’s field game. She has been recognized for bringing her unique box skills to the field game.

Paul Rai, the Vimy Lacrosse Director has worked with Eve for three years, coaching her in both box and field lacrosse.

“Eve is a shining example of what can be achieved through hard work and determination. She has diligently pushed herself every day in our program to be a better student-athlete. She has used her time with Vimy Lacrosse to commit herself to her academics and athletics. I have worked with her for three years and I have watched her develop as a person and as a lacrosse player. She knows there is a long road ahead, but she has laid the foundation for future success. This is a great day for Eve and the entire Hritzuk family. Everyone at Vimy Lacrosse is honored to be a part of her success and we all look forward to working with her for as long as possible.”

The Northwestern Wildcats women’s lacrosse team is a NCAA Division I college lacrosse team representing Northwestern University as part of the Big Ten Conference. From 2005 to 2009, the team won the NCAA Women’s Lacrosse Championship five consecutive times and recorded two undefeated seasons. After losing in the finals in 2010, the Wildcats added their sixth and seventh championships in 2011 and 2012. The Wildcats made the NCAA Tournament every year since 2004. Last year the team finished the season ranked #8 in the country.