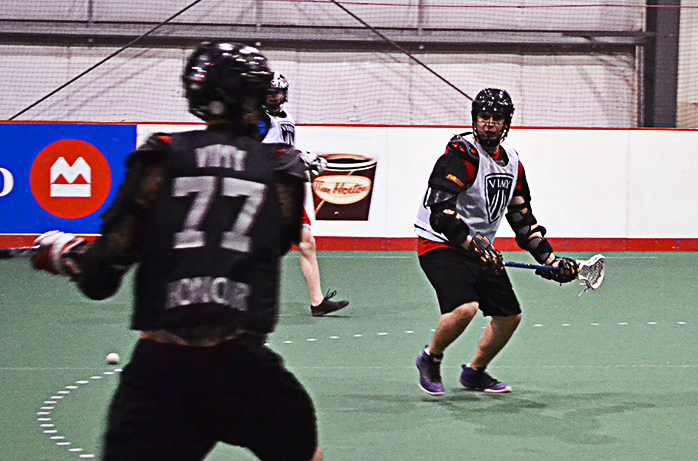 YEAR 6 of the Vimy Winter Lacrosse Program is now accepting registrations. We are extremely excited about the upcoming year and seeing even greater development for all the participants. Sessions will run from early November until March at the Leduc Recreation Centre. Sessions will be divided between skill development and controlled game play. Our focus in the beginning of the program is to develop the skills and as we proceed through the program to increase the gameplay. It is our objective to teach players to play the game the proper way and allow them to show their skills of during the games. Our mandate in this program is to develop lacrosse players who have sound fundamentals. For our goalies, we will be bringing in goalie instructors to ensure players at this position are receiving quality instruction on technique and skills. Specific goalie sessions will be provided during the program to allow us to work directly with the young players.

Jimmy Quinlan – Lead teacher at Vimy Lacrosse, a sports-alternative program that provides lacrosse training to students within the Edmonton Public School Board. Jimmy played for several years in the National Lacrosse League before stepping behind the bench as an Assistant Coach for the team where he won the league championship the past two years.

Paul Rai – Founder and Director of Vimy Lacrosse, program now in its 12th year of operation and boasting over 100 student-athletes. Paul has 20 years of lacrosse coaching experience working with players from Mini Tyke to Senior Mens. He has led box and field teams to numerous tournaments across North America and has won a Presidents Cup Senior B Championship as a player and coach.

Mike DeGirolamo – Mike will be our Head Goalie Coach. Mike finished his Junior A career playing for the Whitby Warriors under Head Coach Derek Keenan. He finished the season second in the league with a 7.76 GAA. Mike was drafted by the Edmonton Rush in 2014 and is working hard to secure a spot in the NLL this upcoming season. He finished this summer playing for the Nanaimo Timbermen of the WLA.

Sarah Oor – Sarah graduated in 2014 after four years playing in the NCAA with Limestone College (Div II), where she served as team captain. Oor is a native of St. Albert where she grew up and played box lacrosse. She was named as an Intercollegiate Women’s Lacrosse Coaches Association (IWLCA) All-American in both 2013 and 2014. She also served as the Captain of Team Canada’s U19 Team (Women’s Field Lacrosse) in 2011 which took the bronze medal in the 2011 World Cup in Hanover, Germany. Sarah is the lead Women’s Coach at Vimy Lacrosse.

Tony DeGans – Tony graduated from the University of Alberta in 2015 with his Bachelor of Kinesiology with a major in Coaching. Tony has been with Vimy Lacrosse for the past 3 years and has continued to enhance the program with his work with the newly formed Donnan Lacrosse at Donnan Elementary. Tony has also worked with Junior A and Junior B Titans for the past four years. His dedication to the sport of lacrosse is exceptional and loves working with young aspiring players.

Erik Turner – Erik is an alumnus of Vimy Lacrosse where he attended high school before leaving for Cornell where he was a member of the Big Red lacrosse team for four years. During his time with the Big Red the team won 3 Ivy League Titles, made 3 NCAA tournament appearances, and one Final Four appearance. Erik brings a wealth of knowledge about the game, and is very excited for the opportunity to help develop the next group of Alberta lacrosse players. Erik works as an instructor at Donnan Lacrosse.