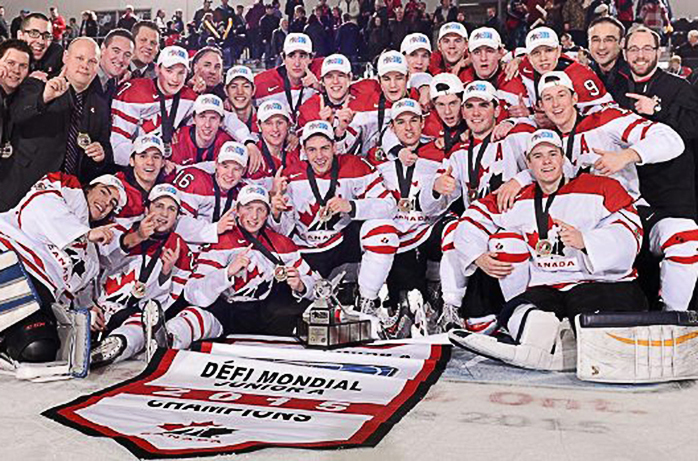 Vimy Hockey High School Director Tim Fragle was named Head Coach of Canada West for the 2015 World Junior A Challenge back in August, after being an Assistant Coach for the team in 2014.

The World Junior A Challenge is a yearly U-20 tournament held in Canada that features 6 teams of Junior A level players: Canada West, Canada East, USA, Russia and two other international teams.

This year’s tournament, held in Coburg, Ontario, was the 10th installment of the event.

Fragle led his Canada West squad to a perfect 2-0 round robin record with wins over the Czech Republic and The US. It was an all-Canada matchup in the Semifinal, where Fragle and Canada West prevailed in a highly offensive 8-5 game. In the final, Canada West defended Canada’s honour vs rival Russia and pulled out a gold medal victory in an extremely tight 2-1 final.

Congratulations to Coach Fragle and Team Canada West on winning their 4th Gold medal in the tournament’s 10 year history!

ALSO OVER THE BREAK:

Donnan/Vimy Hockey would like to congratulate Coach Dan Auchenberg who won the Mac’s Tournament Coach of the Tournament for the Female Division over the Winter Break. Coach Auchenberg is the Head of Coach of the Sherwood Park Fury. The Fury lost in the Semifinal to the Rocky Mountain Raiders after going the rest of the tournament without a loss and a Goals Against Average of only 1.

Coach Auchenberg has taken The Fury from a last place finish just two years ago to perennial contender in the Alberta Major Midget Female Hockey League.

Coach Auchenberg is also the only 2-time winner of Coach of the Tournament at the Mac’s.