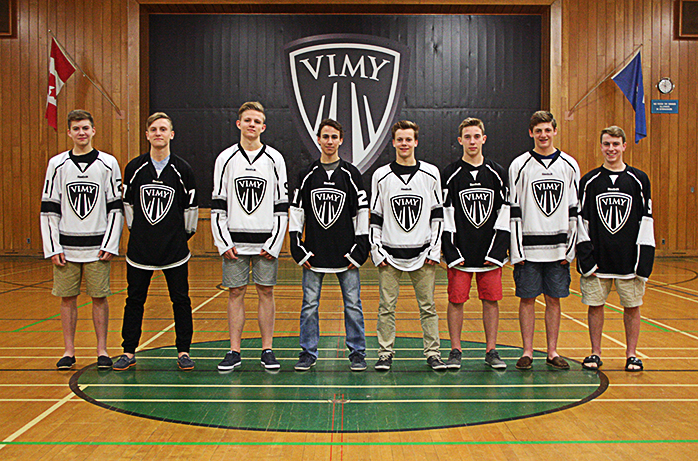 Donnan and Vimy Hockey are proud to congratulate the 11 current student-athletes and alumni who were selected in the WHL Bantam Draft that took place on Thursday, May 7th in Calgary. These young men join a long list of Donnan/Vimy Hockey alums to be drafted into the WHL including Mark McNeill (5th overall, 2008 – Prince Albert Raiders), Colin Smith (7th overall, 2008 – Kamloops Blazers) and Sam Steel (2nd overall, 2013 – Regina Pats).

1st to have his name called this year was SSAC Centre Elijah Brown. Brown was selected in the 1st round, 15th overall by the Seattle Thunderbirds after posting 18 goals and 23 assists for 41 points in 31GP this season.

With the following pick, 16th overall, the Red Deer Rebels selected Defenceman Jacob Herauf from the Sherwood Park Flyers. Herauf provided offence from the backend this season, netting 6 goals and adding 17 assists in his 33GP in the Alberta Major Bantam Hockey League.

Red Deer kept their Donnan and Vimy Hockey theme going by using their 3rd round pick to select Centre Chase Lowry of the Southside Athletic Club. In a shortened season of 21 games played, Chase collected an impressive 16 goals and 20 assists for 36 total points.

In another set of back to back Donnan/Vimy Hockey picks, the Tri-City Americans selected alumnus Liam Belcourt 71st overall while the Kelowna Rockets nabbed alumnus Konrad Belcourt with the 72nd selection.

Alumnus Shawn Harke was the next to be selected, going 134th overall to the Lethbridge Hurricanes joining fellow alum Giorgio Estephan (4th overall, 2012) as Hurricanes picks.

The 10th round featured two current Vimy Hockey student-athletes being drafted into the WHL. Yauheni Astrouski was drafted 204th overall by the Prince Albert Raiders followed by AMBHL Sportsmanlike Player of the Year Isaac Saniga going to the Prince George Cougars.

Congratulations to all of the Donnan and Vimy Hockey student-athletes and alumni who were drafted into the WHL on Thursday and to those who will continue to work hard and make each team regret not selecting them.