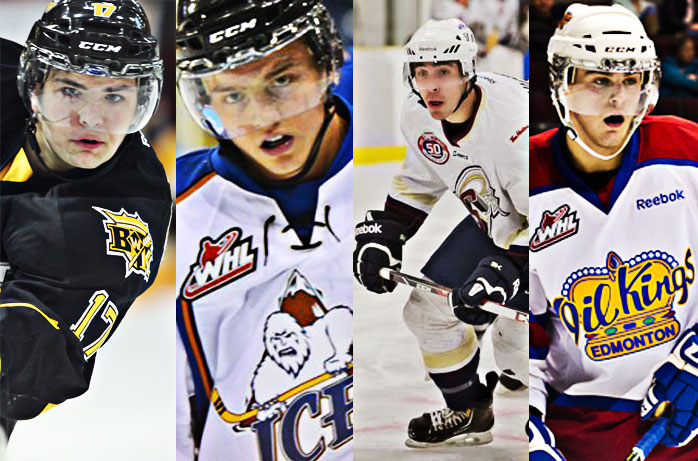 Donnan and Vimy Hockey are proud to congratulate John Quenneville, Brandon Hickey, Jaedon Descheneau and Aaron Irving on being drafted into the NHL at this weekend’s NHL Entry Draft.

With the 30th pick in the 1st round, the New Jersey Devils selected John Quenneville, Centre for the Brandon Wheat Kings in the WHL. This season, John posted 25 goals and 33 assists for 58 pts in 61GP in the regular season and an impressive 13pts in 9GP in the playoffs.

John joins Shawn Belle and Mark McNeill as Donnan/Vimy Hockey alums to be drafted in the 1st round of the NHL Entry Draft.

Hickey had 22pts in 49GP for the AJHL Champion Saints and is a World U17 Challenge Silver Medallist and World Junior A Challenge Bronze Medallist.

The St.Louis Blues were next to select a Donnan/Vimy Hockey alumnus, grabbing skilled forward Jaedon Descheneau at pick 124.

Descheneau was passed over in last years draft; and that may have fueled the winger, as he put up a whopping 98pts in the WHL Regular season with the Kootenay Ice. In the playoffs, Descheneau helped the Ice to what some would call an upset over a powerhouse Calgary Hitmen squad, posting a total of 20pts in 13 playoff games.

Aaron Irving has had a fairly impressive hockey season.

The hard-shooting defenceman had 9 goals and 21 assists for 30pts in 63GP in the regular season and was +26 on the year.

His Edmonton Oil Kings “Took it Back” this year, by reclaiming the Ed Chynoweth Trophy from perennial finals adversaries the Portland Winterhawks.

But they weren’t done there. Irving and the Oil Kings exhibited a huge amount of resilience in the Memorial Cup tournament, winning the semi-final in triple overtime; the longest game in Memorial Cup history, and beat the tournament favourite Guelph Storm in the final to take the Memorial Cup Championship.

Added to this amazing year, Irving joins Donnan/Vimy Hockey alum Jaynen Rissling in the Nashville Predators system, after being drafted by the Predators in the 6th round.

Congratulations to all of these student-athletes on this achievement and to their NHL Clubs for drafting such exceptional talents.