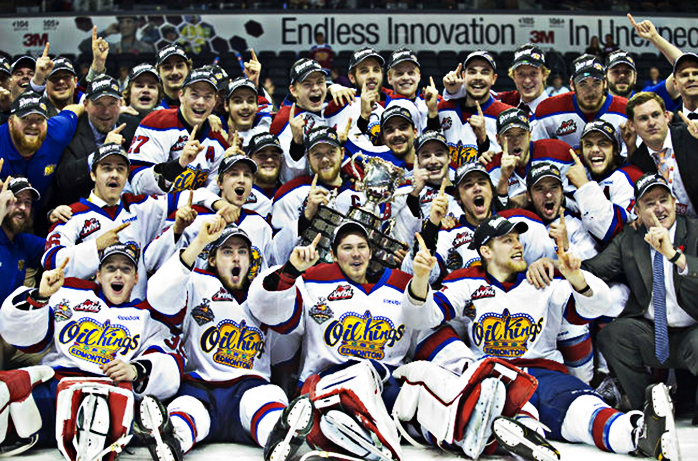 The Road to the Memorial Cup was not an easy one for the Oil Kings, who had their backs against the wall in several elimination games along the way, not the least of which being a game 7 road victory against the Portland Winterhawks to seal the WHL Championship and gain entry into the tournament. Just days before the final, the Oil Kings had their mettle tested again in a 4-3 TRIPLE OVERTIME victory over the Val-D’or Foreurs, which was the longest game in Memorial Cup history.

In the final game, the Storm came out hard and got out to a 1-0 lead just 1 minute into the game and followed that up by drawing 2 penalties.

But, the Oil Kings killed them off and scored their own power play marker to knot the game at ones.

After the Storm scored to take a 2-1 lead, Donnan/Vimy Hockey student-athlete Tyler Robertson walked off the wall off on O-zone faceoff and went top-shelf to tie the game at 2.

The Oil Kings didn’t look back and took the game 6-3 to further cement Edmonton as “The City of Champions.”

As noted earlier, the Oil Kings were full of Donnan and Vimy Hockey staff, student-athletes and alumni.

On the blue line, Donnan/Vimy Hockey was represented by Aaron Irving who was recently ranked in the top 100 of the NHL Central Scouting draft list for this year’s NHL Entry Draft.

Up front, Vimy Hockey student-athlete and former Spruce Grove Saints Forward Tyler Robertson was on the left side, scoring an important game tying goal in the final and posting a +1 for the tournament.

Vimy Hockey High School Instructor Steve Hamilton is the team’s Associate Coach for the fourth season, having already won a WHL Championship with the club in 2011-2012.

Providing up to the minute video updates for the coaches and players was former Donnan/Vimy Hockey staffer Jory Stuparyk, the team’s Video Coach.

And the Oil Kings can thank Donnan/Vimy Hockey Skating Instructor from Quantum Speed Vanessa Hettinger for their fast legs as she was the team’s Skating Coach.

Congratulations to the Oil Kings and all of the Donnan and Vimy Hockey representatives on winning one of the hardest championship to win in all of sports. You all are an example in resilience, teamwork and perseverance that all athletes and coaches can look up to.