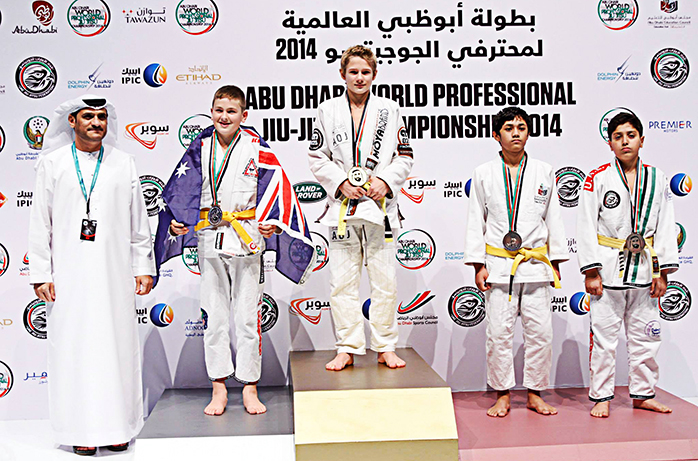 2200 athletes from across the world (71 countries) came to the heart of the United Arab Emerites- Abu Dhabi, to compete for the title of “Best Professional Jiu – Jitsu fighter”. 1 of those athletes was Donnan BJJ and Vimy student-athlete David Elliott.

The 6th edition of the Abu Dhabi World Professional Jiu-Jitsu Championship held under the Patronage of His Highness General Sheikh Mohammed Bin Zayed Al Nahyan, Crown Prince of Abu Dhabi, and Deputy Supreme Commander of the UAE Armed Forces, concluded with award-winning displays of athleticism as the top Jiu–Jitsu fighters from around the world competed for the title of “Best Professional Jiu-Jitsu fighter” in their belt category.

One World. One Fight.

David Elliott was able to submit both of his opponents by triangle choke earning him the Abu Dhabi World Professional Jiu-Jitsu Championship in the Junior Yellow Belt 54.6kg division!

The very next day of his return, David competed at the local Submission Series Tournament and brought home two more medals.

David had this to say about the people that helped get him to where he is today:

“Mom, I know my schedule is hard on you, and I want you to know that without you, none of this would have ever been possible. That big hug I gave you, I meant it. Special thanks to Professor Malin, Professor Andrew, Professor Gui, Professor Rafa, Sensei Ryan, Monitor Mike…its an effort of all to where I am today.”

David’s Abu Dhabi win adds to a growing list of Local titles including:

For more information on David Elliott, visit his featured student-athlete profile on Donnan.ca