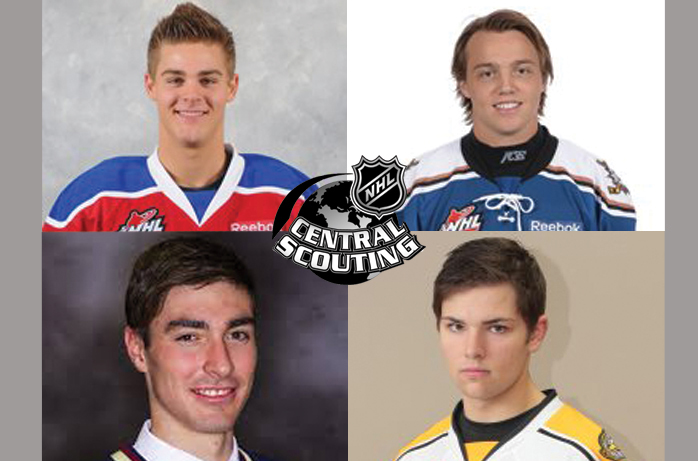 Four Vimy Hockey alumni were recently ranked in the NHL Central Scouting Mid-Term Report. Central Scouting (operating for almost 40 years) was created as a scouting service for the NHL member clubs and their lists are seen as an indicator as to where draft-eligible players rank within their peer group.

John Quenneville, currently a point-per-game Centre (43pts in 43GP) for the Brandon Wheat Kings (WHL) with his brother Peter (drafted last year by the Columbus Blue Jackets) was ranked 34th on the list of North American skaters. High School Director Tim Fragle had this to say about John:

“John Quenneville during his at time Vimy displayed high skill set and overall growth as a player. John has a very competitive side to his game that all coaches appreciate. I’m not surprised by his success this year as he put in alot of work in the off season to become a better player.”

Brandon Hickey, Defenceman for the Spruce Grove Saints (AJHL), currently has 16 pts in 37GP in Spruce Grove and was ranked 63rd on the North American list. Associate Coach for the Saints and High School Instructor Mike Ringrose had this to say about the 17-year old standout:

“This year in Spruce Grove we have seen Brandon take the next step and become an elite defenseman in our league. He is an excellent skater, possesses a heavy shot, and defends exceptionally well. Brandon plays in every situation for us, and is a great teammate, it is nice to see him get this well-deserved recognition.”

Edmonton Oil King Defenceman Aaron Irving, was ranked 119th on the North American list, is currently +20 (!) and was selected to participate in the Top Prospects game on Wednesday, January 15th, 2014. Associate coach for the Edmonton Oil Kings and High School Instructor Steve Hamilton is impressed with his development:

“I have been fortunate to watch Aaron develop through the Hockey Program at Vimy and the Edmonton Oil Kings. Aaron has done a tremendous job developing his game. He is a very good student of the game and has become a legitimate NHL Prospect.”

And Kootenay Ice skilled winger Jaedon Descheneau was ranked 122nd after amassing 57pts (28G – 29A) in 45 games. Mr. Fragle had this to say about Jaedon:

“Jaedon Descheneau refined and worked on his skill set at Vimy and he now has elite skill level at the Western Hockey League level. Jaedon has a strong hockey IQ and his vision is top notch.”

Congratulations to all of these former Donnan and Vimy Hockey student-athletes on their hard work and recognition at the highest level.