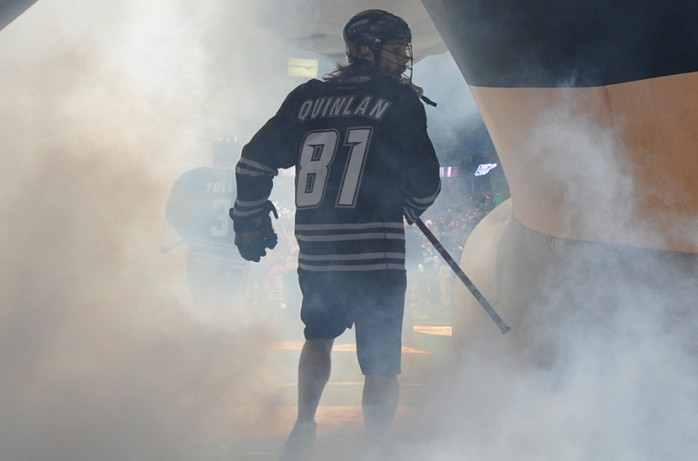 The Edmonton Rush will retire Mr.Quinlan’s #81 at their Home game vs the Calgary Roughnecks on Friday, January 17th.

Here is the press release from the Edmonton Rush:

The Rush will honor 8-year veteran and longest team member on Friday, January 17 when the team takes on provincial rivals the Calgary Roughnecks. The team will retire jersey number “81” and celebrate their “One and Only #81” , Jimmy Quinlan’s career.

“It is only fitting that “81” be retired on the game night against the Roughnecks, many of Quinlan’s highlights are battles and showcases against them” states GM/Head Coach Derek Keenan.

Perhaps the most memorable of Quinlan’s actions came during the Rush’s first-ever playoff appearance in 2010. After being up most of the night and seeing the birth of his first child, daughter Gracie, Quinlan raced from Edmonton to Calgary just in time for the faceoff, and the Rush went on to post a stunning victory over the defending champion Roughnecks in the West Semi-Final.

The longest-serving member of the Edmonton Rush and fan favorite formally announced his retirement in early September , prior to the start of the 2014 season. He moved from player to the Rush bench for the 2014 National Lacrosse League season as he takes over the duties of defensive assistant coach. The Sherwood Park native has replaced defensive coach Devan Wray, who did not return to the team due to family commitments.

Quinlan joined the Rush for the team’s inaugural season after one year with the Toronto Rock, and went on to become the Rush’s Captain for his final two years with the team. He also finishes his career as the second-leading scorer in team history with 219 points. Quinlan’s lone goal in the 2013 campaign allowed him to reach the 100-career goal plateau. He also finishes with 119 assists in the Rush’s black and silver, and ends his nine-year career with 229 regular-season points, 544 loose balls, eight points in seven playoff games, and a pair of NLL All-Star Game appearances.

Far beyond his point totals Quinlan will be remembered for his competitive spirit, leadership, and gamesmanship. After four seasons anchoring the Rush’s offensive attack that included career-highs for goals (23), assists (32), and points (55) in 2007, Quinlan took it upon himself to supply greater depth to the Edmonton defensive corps by switching positions from forward to transition.

Quinlan’s fiery nature brought the best out of his teammates, and he went to battle for many of them in heated altercations. Many nights, Quinlan left Rexall Place and arenas around the NLL sporting bumps, bruises, black eyes, and scraped knees. Despite putting his body on the line every night, Quinlan played in 133 of 134 total regular-season and playoff games in eight seasons with the Rush.

Make sure you get your tickets to the game by calling the Rush Office at 780-732-RUSH.