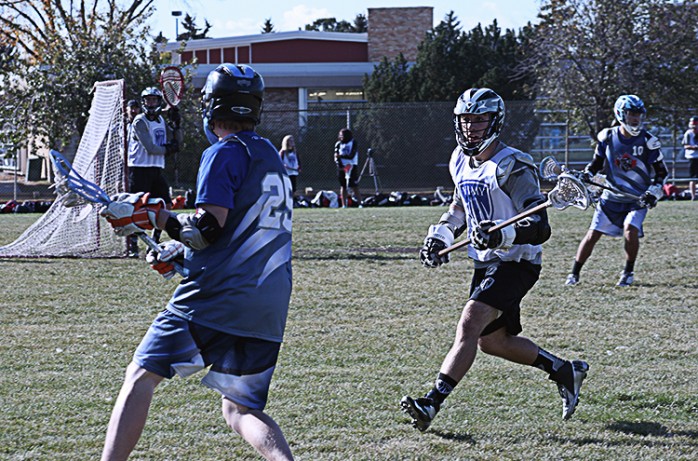 On October 11th, Vimy Lacrosse met the St. Francis Xavier Lacrosse Program in the first of a home-and-home field lacrosse series. It was an opportunity for Vimy Lacrosse to gain some game experience playing a different team. After competing against each other all Fall, the students were excited to play another school. All of our male and female students from Grades 8 to 12 dressed for the game. The team looked prepared and polished in their blue and white pinnies, new Headwrapz and black Vimy shorts. It was chance to show off some Vimy pride on their home turf.

The game started off slowly for both teams, but as the substitutes came in, the Vimy team started to roll. Goals started to come in bunches and as the younger Vimy players entered the game, the rout was on. Vimy ended up winning the game 12 – 4 due to some exceptional offensive performances and some very stingy defense. It was awesome for the students to play in front of their families and fellow students that lined the field. The pace of the game was exceptional and it was very rewarding to watch the student-athletes executing all the things they have been learning in the Fall.

One week later, Vimy Lacrosse met FX Lacrosse in a rematch. Vimy was able to play almost its entire roster of junior high and senior high players. Again Vimy came up on top with a 6 – 4 victory. The competition was fun and the overall experience of the games proved to many how much everyone had improved during the Fall Ball season. Our students are well prepared for the field game and are ready for their next step in the development cycle.