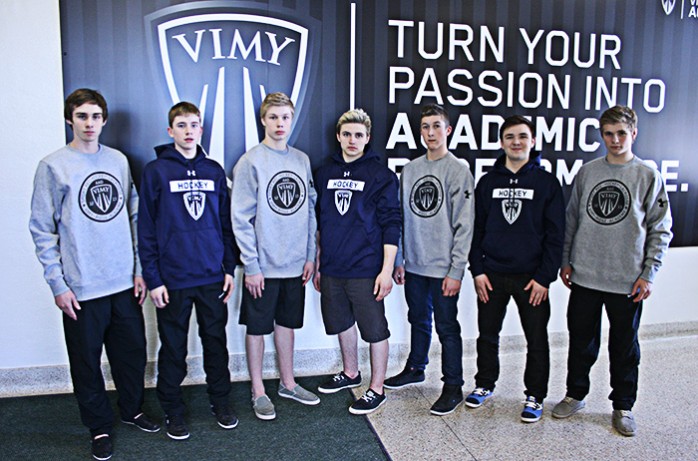 Donnan and Vimy Hockey are proud to congratulate 7 current Vimy Hockey student-athletes on being drafted into the WHL in the Bantam Draft on Thursday, May 2nd.

Sam Steel, David Quenneville, Nolan Volcan, Hunter Lorenson, Cale Chalifoux, Carter Hart and Keenan Roszko all had their names called by WHL teams at the draft, which was held in Calgary.

Sam Steel, centre for the Sherwood Park Flyers takes the record for the highest ever Bantam Draft selection for a Vimy Hockey student-athlete, selected by the Regina Pats, who won the draft lottery to move from 6th place to 2nd overall. Steel had an impressive 104 points this season in 31 games.

David Quenneville was the next to be selected, as the SSAC Defenceman was taken 10th overall by the Medicine Hat Tigers to be the second of two top ten picks in the Bantam Draft for Vimy Hockey. Quenneville was 2nd in Defenceman scoring in the AMBHL with 32 goals and 72 points in 32 games.

In the second round, MLAC winger Nolan Volcan was selected 27th overall by the Seattle Thunderbirds. Volcan was 8th in AMBHL scoring with 40 goals and 76 points in 32 games played.

In the fifth round, Hunter Lorenson, the first of two Vimy Hockey goalies was selected by the Swift Current Broncos. Hunter was also a member of the Maple Leaf Athletic Club Bantam AAA squad, where he posted a .915 save percentage and a 13-4-1 record.

KC Defenceman Cale Chalifoux stayed in province when he was selected in the 6th round, 124th overall by the Red Deer Rebels after posting 10 points and 62 PIMS this season.

In the 8th round, Sherwood Park Flyers goalie Carter Hart was selected by the Everett Silvertips after playing 1285 minutes this season, good for 2nd best in Alberta. Also selected in the 8th round was Steel and Hart’s teammate in Sherwood Park , big forward Keenan Roszko, who was nearly a point per game player with 23 points in 26 games played and was drafted 173rd by the Kamloops Blazers.

Congratulations to these exceptional athletes as they begin what will hopefully be long and successful Western Hockey League careers.