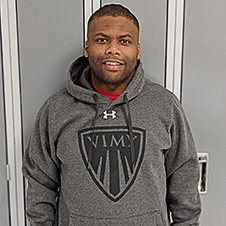 This is Zack’s third year as a staff member with Vimy Hockey. He will be an on-ice instructor in the Junior High program. He previously attended Vimy Ridge as a student from grades 8-12, graduating in 2008.

Zack graduated from the University of Alberta in 2015 with a Bachelor of Arts – Sports, Recreation and Tourism. While attending school, he was also a member of the Golden Bears hockey team. While playing with the Bears, the team won back to back national championships in 2014 and 2015. Before playing for UofA, Zack spent five years in the Western Hockey League. He played his whole career for the Everett Silvertips, serving as the Captain in his last two seasons. While in Everett, his team won the Scotty Munro Memorial Trophy as the WHL regular Season Champions in 2007.

He is very excited to be a part of Vimy Hockey. He had instructors from Vimy who he credits a lot of his on-ice success to and hopes to be that mentor for players coming through the Vimy program. Zack is looking forward to developing good hockey players and more importantly great citizens in the community.

This season Zack is the Assistant Coach with the ACAC Champion Grant MacEwan Griffins and is excited to work with all levels of student-athlete.