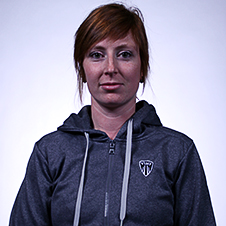 Lindsay has taught with the Edmonton Public School Board since 2007, after graduating from the U of A with a combined PE/Ed degree.

While studying at the U of A, she played for the Pandas Hockey team, winning 5 National Championships and was named CIS Player of the Year in her 5th and final season. Lindsay then continued her education, pursuing a Masters Degree in Sport Sociology, and graduated in 2009.

During this time Lindsay was an assistant coach with the Pandas, and she has since moved on to Head Coach the MacEwan University Griffins for the past 4 seasons.

Lindsay also own High Tempo Hockey, which is an all-female conditioning camp and hockey school, running throughout the summer and various points during the winter season.

She is excited to be back at Vimy Hockey this year and working with the high school student-athletes.