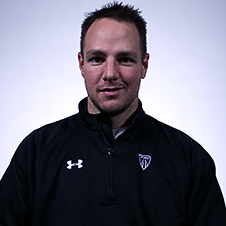 Mr. Schwartz has worked extensively on facilitating the OR Sports program, a model that has been adopted at Vimy Ridge and Donnan School. It has allowed for Dustin’s growth as a coach and a change in philosophy as to how we approach goaltender training.

Dustin played five seasons of junior hockey, four of those with the WHL Medicine Hat Tigers and Red Deer Rebels, before completing junior hockey with the Lloydminster Blazers and finally with the Royal Bank cup champion Fort McMurray Oil Barons in 2000. Upon graduating from the junior ranks Dustin headed to the U of A where he studied physical education and education and in five years was able to attain a degree in both subject areas. While attending the University of Alberta Dustin was a member of the Golden Bears hockey program for five consecutive seasons, where he was able to achieve some individual recognition and more importantly a National Championship in his final year. In 1997 Dustin attended the Phoenix Coyotes training camp and gained a great amount of experience from that opportunity including one exhibition game. Dustin takes great pride in his achievement of attending the Los Angeles Kings training camp in 2003. Though unable to sign a pro contract he realized the importance of achieving success academically.

Dustin continues to work with the Edmonton Oil Kings as a consultant. Mr. Schwartz has won two WHL championships and the Memorial Cup in 2014 as a part of the Oil Kings organization. He was involved with the Nait Ooks program for 6 seasons, the Spruce Grove Saints for 7 seasons, the Sherwood Park Crusaders for 3 seasons. Mr.Schwartz has been a part of Hockey Canada’s World Junior and under 18 goaltender development camps and won a gold medal with Hockey Canada under 18 team at the Ivan Hlinka tournament in the Czech Republic. He maintains involvement in the grassroots programs throughout Western Canada and enjoys providing instruction to the future generation goaltenders.

When he is not spending time at the rink, Dustin enjoys the outdoors; fly fishing, hiking, golfing, running and spending time with his family.