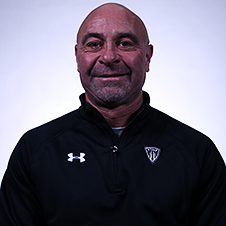 Dan has been involved with Donnan and Vimy Hockey for the past 15 years, and has done so with a youthful attitude that the student-athletes at both campuses can relate to. Aside from Donnan and Vimy Hockey, Dan has coached for 30 years at all levels of hockey from the Novice up to the Junior level. Dan has 10 years of AJHL coaching experience and was named coach of the year by the AJHL in 2002, and in 2003 he guided his team to a first overall finish.

Currently, Dan is the head coach for the Sherwood Park Midget AAA Fury Women’s team. Previously, Dan was the Head Coach of the Midget AAA Maple Leaf Athletic Club and the Edmonton Thunder Female Midget AAA team. In 2008 and 2010, the Thunder won provincials and regionals, before competing in 2 consecutive ESSO Cups, the National Female Midget Championship and winning a Bronze Medal. Dan was voted the Top Coach at the prestigious Mac’s Cup tournament as well as Coach of the Year within the AMMFHL.

He is currently coaching a group of year 2000 aged players in the spring and has been signed on for five years to guide these players in their hockey careers. He was also a coach for the Team Brick for 12 years. Dan has received his advanced coaching certificate from Hockey Canada.

No stranger to playing the game as well, Dan last played hockey himself for the Spruce Grove Oil Kings.

Away from the rink, Dan enjoys spending time at the lake with his family and spending quality time with his grandchildren.