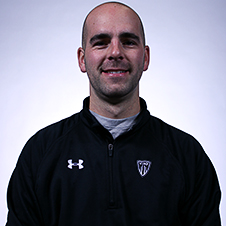 Blair is a graduate of the University of Alberta, having earned both his Education and Physical Education degrees in 2005. Born and raised in Lloydminster, he became a goalie by default. The youngest of three boys, Blair strapped on the couch cushions for many a game of basement hockey with his big brothers. All of this practice prepared him for his goaltending position later in life with the Lloydminster Blazers, Yorkton Terriers Regina Pats and Tri-City Americans.

Mr. Faulkner has been with Vimy Hockey since 2013 and he is excited to get back into the sport that gave him so much.

Being outdoors and staying active are strong passions for Blair as he enjoys biking, skiing, squash, wakeboarding and golfing. Blair is kept busy at home with his two girls and he and his wife, Jaclyn, look forward to watching them grow and traveling together as a family.