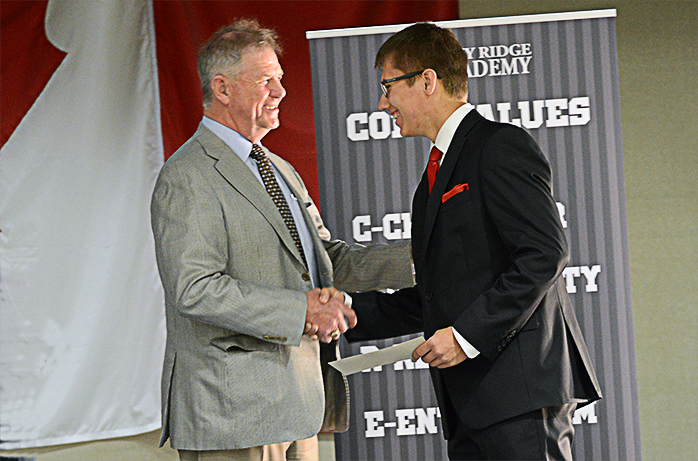 A staple on the Academic and Athletic Development (AAD) staff roster is calling it a career.

Roger Castle, AAD Education advisor since 1999, recently confirmed that he is retiring from his position as of the beginning of the school year.

While not always in the limelight on the ice or in the field, the impact that Roger had on the student-athletes at Donnan and Vimy over the years can not be overstated. Roger’s passion was ensuring that student-athletes of all skill levels remained committed to their academics and were given every opportunity to excel in that area.

Roger was a teacher and school administrator for 28 years with Elk Island Public Schools, after which he taught education courses for 8 years at the University of Alberta and Concordia University College of Alberta. Roger was also the Director of Education for the AJHL from 2003-2008, the Education Advisor for the Edmonton Oil Kings for 6 years and the Manager of Education Services for the Western Hockey League in 2013/2014.

Obviously, education and the game of hockey were always intertwined in Roger’s career. Roger was a hockey official for 25 years on the ice. He worked every level of minor hockey and progressed to two levels of professional hockey officiating. Roger also worked several national championships at the Junior A, ACAC and CIS level while also representing Canada at the IIHF World Senior A Championships and many other IIHF events.

For the student-athletes at AAD, Roger was available to discuss academic options, facilitate SAT prep and testing and ensure that student-athletes who transfer schools due to junior hockey affiliations are able to graduate high school successfully. Roger created the AAD Scholarship Program, and with the help of former Vimy Sport Fit Program Director Stephen Armitage has seen the program award over 100,000 dollars to deserving AAD student-athletes at Donnan and Vimy to date.

Roger was also the catalyst for Vimy Ridge Academy becoming an SAT centre, which had been a long-time personal goal of his. This is a feather in the cap of an amazing career and a testament to Roger’s commitment to his vision.

The student-athletes who have had the opportunity to work with Roger are better for having gained his experience. Academic and Athletic Development and our programs will forever bear the impression of this great educator.

We would like to wish Roger and his wife Gwen good luck and good health as they pursue their retirement dreams.